From the talks and writings of Sri Sri Paramahansa Yogananda: 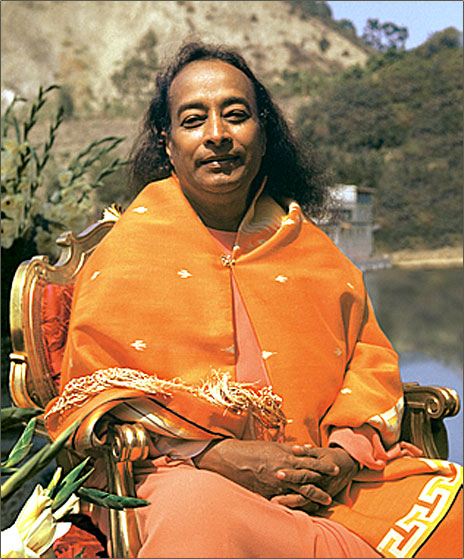 “Your life will reflect spiritual consciousness if you meditate. Since the publication of my book [Autobiography of a Yogi], everyone is asking about Kriya Yoga. That is my purpose. I didn’t come to give theological abstractions, but a technique whereby those who are sincere can truly know God, not just theorise about Him….The practice of Kriya gives the true experience of religion, which cannot be had by just talking about God. Jesus said: ‘Why call ye me, Lord, Lord, and do not the things which I say?’
“When by Kriya Yoga I open my spiritual eye, the whole world drops away from my consciousness, and God is with me. And why not? I am His child. St. Ignatius said, ‘God seeks willing hearts that He may give His bounties to them….’ That is most beautiful, and that is what I believe. God seeks willing hearts for the bestowal of His gifts. He is willing to give us everything, but we are not willing to make the effort to be receptive.”
— Paramahansa Yogananda
Journey to Self-realization

Open Oneself to the Blessings of God 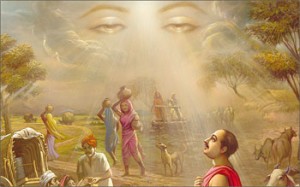 “Prayer with devotion is a wonderful means of opening oneself to the freely flowing blessings of God, a necessary link of man’s life to the Infinite Source of all benefaction. But it takes a long time for prayer to be effective when the mind is outwardly roaming. That is why one hour of Kriya Yoga meditation can bestow more effect than twenty-four hours of ordinary prayer.
“Those who practice the technique of Kriya deeply for even a little while, and sit long in meditation in the resultant stillness, find that the force of their prayer is doubled, trebled, a hundred times more powerful. If one enters the inner temple of silence and worships before the altar of God with prayer and invocation of His presence, He comes quickly. When the consciousness is withdrawn from the sensory surface of the body and its surroundings and centralized in the cerebrospinal shrines of soul perception, that is the most effective time to pray.”
— Paramahansa Yogananda,
The Second Coming of Christ:
The Resurrection of the Christ Within You

[Bhagavad Gita IV:29]
Kriya Yoga is twice referred to by Lord Krishna in the Bhagavad Gita. One stanza reads: “Offering the inhaling breath into the exhaling breath and offering the exhaling breath into the inhaling breath, the yogi neutralizes both breaths; thus he releases prana from the heart and brings life force under his control.” The interpretation is: “The yogi arrests decay in the body by securing an additional supply of prana (life force) through quieting the action of the lungs and heart; he also arrests mutations of growth in the body by control of apana (eliminating current). Thus neutralizing decay and growth, the yogi learns life-force control.”

“The Kriya Yoga that I am giving to the world through you in this nineteenth century,” Babaji told Lahiri Mahasaya, “is a revival of the same science that Krishna gave millenniums ago to Arjuna; and that was later known to Patanjali and Christ, and to St. John, St. Paul, and other disciples.”
— Paramahansa Yogananda,
Autobiography of a Yogi

“Kriya Yoga is the highest method of God contact. In my own search for God I travelled all over India, and heard wisdom from the lips of a number of her greatest masters. I can therefore vouch for the fact that in Yogoda Satsanga [Self-Realization] teachings are the highest truths and scientific techniques given to mankind by God and the Great Ones.

“The aftereffects of Kriya bring with them the utmost peace and bliss. The joy that comes with Kriya is greater than the joys of all pleasurable physical sensations put together. ‘Unattracted to the sensory world, the yogi experiences the ever new joy inherent in the Self. Engaged in divine union of the soul with Spirit, he attains bliss indestructible’ (Bhagavad Gita V:21). From that joy experienced in meditation I receive the rest of a thousand sleeps. Sleep becomes virtually unnecessary to the advanced Kriya Yogi.
“When by Kriya Yoga the devotee enters samadhi, wherein his eyes, breath, and heart are quieted, another world comes into view. Breath, sound, and movement of the eyes belong to this world. But the yogi who has control of the breath may enter the heavenly astral and causal worlds and commune there with God’s saints, or enter cosmic consciousness and commune with God. The yogi is not interested in anything else.
“Whoever will give less importance to everything else, remembering what I have said, will get to God without fail.”
— Paramahansa Yogananda,
Man’s Eternal Quest

“Each of your habits creates a specific ‘groove,’ or pathway, in the brain. These patterns make you behave in a certain way, often against your wish. Your life follows those grooves that you yourself have created in the brain. In that sense you are not a free person; you are more or less a victim of the habits you have formed. Depending on how set those patterns are, to that degree you are a puppet. But you can neutralize the dictates of those bad habits. How? By creating brain patterns of opposite good habits. And you can completely erase the grooves of bad habits by meditation. There is no other way. However, you can’t cultivate good habits without good company and good environment. And you can’t free yourself from bad habits without good company and meditation….
“Every time you meditate deeply on God, beneficial changes take place in the patterns of your brain. Suppose you are a financial failure or a moral failure or a spiritual failure. Through deep meditation, affirming, ‘I and my Father are one,’ you will know that you are the child of God. Hold on to that ideal. Meditate until you feel a great joy. When joy strikes your heart, God has answered your broadcast to Him; He is responding to your prayers and positive thinking. This is a distinct and definite method:
“First, meditate upon the thought, ‘I and my Father are one,’ trying to feel a great peace, and then a great joy in your heart. When that joy comes, say, ‘Father, Thou art with me. I command Thy power within me to cauterize my brain cells of wrong habits and past seed tendencies.’ The power of God in meditation will do it. Rid yourself of the limiting consciousness that you are a man or a woman; know that you are the child of God. Then mentally affirm and pray to God: ‘I command my brain cells to change, to destroy the grooves of bad habits that have made a puppet out of me. Lord, burn them up in Thy divine light.’ And when you will practice the Yogoda Satsanga Society of India techniques of meditation, especially Kriya Yoga, you will actually see that light of God baptizing you.”