What is Kriya Yoga?

Kriya Yoga is an ancient technique for self-realization which is well known in India. Through Paramahansa Yogananda and his “Autobiography of a Yogi” it became popular in the West in the 1920s, yet it remains a mysterious and fascinating spiritual path. It is taught by a limited number of masters, most of whom are Indian. Paramahansa Yogananda arrived in the United States in 1920, where he taught Kriya Yoga in accordance with his master’s request. The transmission of this teaching has been continued without interruption ever since. Several masters have in the past come to Western countries to teach Kriya Yoga so that it is available to everyone.

The goal of life is happiness, peace, love and enlightenment. The desire for perfection comes from the Self, the image of God, which seeks to express itself through all humanity.

Kriya Yoga is a scientific art of God, Truth union and Self-Realization. It was revived by a great master of India, Babaji Nagaraj, as a synthesis of ancient teachings of the 18 Siddha tradition. It includes a series of techniques or ‘kriyas’ grouped into five phases or branches. Paramahamsa Yogananda taught that practice of Kriya Kundalini Pranayama can accelerate the natural progression of Divine Consciousness in human beings. 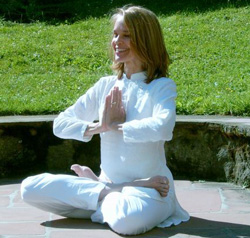 Kriya Yoga the significance of initiation is often overlooked. Initiation is a sacred act in which an individual is given their initial experience of a means to realizing some truth. That means is a kriya or “practical yogic technique,” and the truth is a portal to the eternal and infinite One. Because this truth is beyond name and form, it cannot be communicated through words or symbols. It can be experienced however, and for this one needs a teacher who can share his or her own living experience of the truth. The technique becomes a vehicle by which the teacher shares with the practioner the means to realize the truth in oneself.